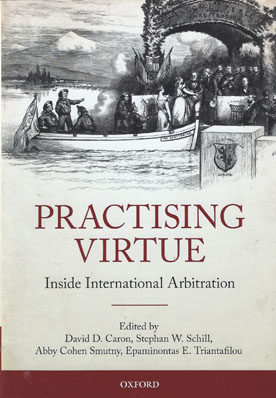 International arbitration has developed into a global system of adjudication, dealing with disputes arising from a variety of legal relationships: between states, between private commercial actors, and between private and public entities. It operates to a large extent according to its own rules and dynamics - a transnational justice system rather independent of domestic and international law. In response to its growing importance and use by disputing parties, international arbitration has become increasingly institutionalized, professionalized, and judicialized. At the same time, it has gained significance beyond specific disputes and indeed contributes to the shaping of law. Arbitrators have therefore become not only adjudicators, but transnational lawmakers. This has raised concerns over the legitimacy of international arbitration.

Contents:
Practising Virtue: An Introduction
PART I: INTERNATIONAL ARBITRATION AS PART OF THE TRANSNATIONAL JUSTICE SYSTEM
1. The Transnational Protection of Private Rights: Issues, Challenges, and Possible Solutions
2. The Changing World of International Arbitration
3. International Commercial Arbitration and Investment Treaty Arbitration
4. International Jurisprudence, Global Governance, and Global Administrative Law
5. The Culture of Arbitration and the Defence of Arbitral Legitimacy
6. Conceptions of Legitimacy in International Arbitration
PART II: HISTORY AND SOCIOLOGY OF INTERNATIONAL ARBITRATION
7. The Historical Keystone to International Arbitration: The Party-Appointed Arbitrator - From Miami to Geneva
8. 'Black's Bank' and the Settlement of Investment Disputes
9. Judge Sir Hersch Lauterpacht's Report on the Revision of the Statute of the International Court of Justice
10. Jurisdictional Errors: A Critique of the North American Dredging Company Case
11. Sociology of International Arbitration
12. From Law Professor to International Adjudicator: The WTO Appellate Body and ICSID Arbitration Compared - A Personal Account
13. The Advocate in the Transnational Justice System
PART III: AUTHORITY OF INTERNATIONAL ARBITRAL TRIBUNALS AND ITS LIMITS
14. Pre-Arbitration Procedural Requirements: 'A Dismal Swamp'
15. At What Time Must Jurisdiction Exist?
16. Local Remedies in International Treaties: A Stocktaking
17. Investor-State Tribunals and National Courts: A Harmony of Spheres?
18. Should International Commercial Arbitrators Declare a Law Unconstitutional?
19. The Enforceability of Legislative Stabilization Clauses
20. Non-Payment of Advances on Costs: No Pay, Can Play?
21. Document Production and Legal Privilege in International Commercial Arbitration
22. Fair and Equitable Treatment of Witnesses in International Arbitration - Some Emerging Principles
PART IV: REASONING AND DECISION-MAKING IN THE ARBITRAL PROCESS
23. Regulating Opacity: Shaping How Tribunals Think
24. The Development of Legal Argument in Arbitration: Law as an Afterthought - Is It Time To Recalibrate Our Approach?
25. Babel and BITs: Divergence Analysis and Authentication in the Unusual Decision of Kilic v. Turkmenistan
26. Reporting from the Arbitral Shop-Floor: Treaty Interpretation in Practice
27. Judge Brower and the Vienna Convention Rules of Treaty Interpretation
28. Contemporaneity and Its Limits in Treaty Interpretation
29. Deliberations of Arbitrators
30. Charles Brower's Problem with 100 Per Cent-Dissenting Opinions by Party-Appointed Arbitrators in Investment Arbitration
31. How to Draft Enforceable Awards under the Model Law
PART V: STUDIES IN INVESTMENT TREATY ARBITRATION
32. The Deal with BITs: What the Parties Thought They Would Get, What They Thought They Were Giving Up to Get It, and What They Got
33. Reflections on 'Most Favoured Nation' Clauses in Bilateral Investment Treaties
34. The Non-Disputing State Party in Investment Arbitration: An Interested Player or the Third Man Out?
35. Time in International Law and Arbitration: The Chess Clock No Longer Works
36. Challenges to Arbitrators in ICSID Arbitration
37. 'Pure' Issue Conflicts in Investment Treaty Arbitration
38. CompensationDue in the Event of an Unlawful Expropriation: The 'Simple Scheme' Presented by Chorzow Factory and Its Relevance to Investment Treaty Disputes
39. FutureDamages in Investment Arbitration - A Tribunal with a Crystal Ball?
40. Allocation of Costs in Recent ICSID Awards
41. The Two Annulment Decisions in Amco Asia and 'Non-Application' of Applicable Law by ICSID Tribunals
42. Of Wit, Wisdom, and Balance in International Law: Reflections on the Tokyo Resolution of the Institut de Droit International