The Emperor of Law: The Emergence of Roman Imperial Adjudication 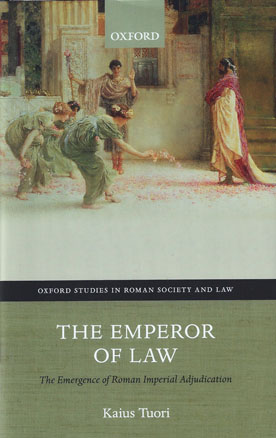 In the days of the Roman Empire, the emperor was considered not only the ruler of the state, but also its supreme legal authority, fulfilling the multiple roles of supreme court, legislator, and administrator. The Emperor of Law explores how the emperor came to assume the mantle of a judge, beginning with Augustus, the first emperor, and spanning the years leading up to Caracalla and the Severan dynasty. While earlier studies have attempted to explain this change either through legislation or behaviour, this volume undertakes a novel analysis of the gradual expansion and elaboration of the emperor's adjudication and jurisdiction: by analysing the process through historical narratives, it argues that the emergence of imperial adjudication was a discourse that involved not only the emperors, but also petitioners who sought their rulings, lawyers who aided them, the senatorial elite, and the Roman historians and commentators who described it.

Stories of emperors settling lawsuits and demonstrating their power through law, including those depicting 'mad' emperors engaging in violent repressions, played an important part in creating a shared conviction that the emperor was indeed the supreme judge alongside the empirical shift in the legal and political dynamic. Imperial adjudication reflected equally the growth of imperial power during the Principate and the centrality of the emperor in public life, and constitutional legitimation was thus created through the examples of previous actions - examples that historical authors did much to shape.

Aimed at readers of classics, Roman law, and ancient history, The Emperor of Law offers a fundamental reinterpretation of the much debated problem of the advent of imperial supremacy in law that illuminates the importance of narrative studies to the field of legal history.

Contents:
List of Illustrations
Introduction
1: Caesar, Cicero, and the Models of Legal Autocracy
2: Augustus as Judge and the Relegation of Ovid
3: Divine or Insane: Emperors as Judges from Tiberius to Trajan
4: Hadrian as the Ideal Judge
5: Caracalla, the Severans, and the Legal Interest of Emperors
6: Conclusions
Appendix
Known Instances of Imperial Adjudication from Caesar to Severus Alexander and their Sources
Endmatter
Bibliography
Index