Millington and Sutherland Williams on The Proceeds of Crime 5th ed 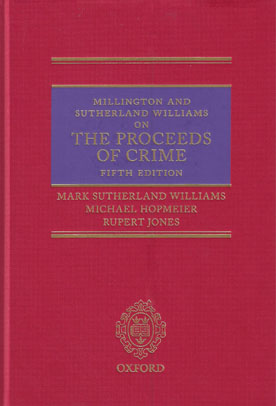 Millington and Sutherland Williams on The Proceeds of Crime provides a definitive guide to all aspects of the law concerning the recovery of the proceeds of crime in England and Wales.

It provides an easily navigable step-by-step approach that considers how the legislation is geared to ensuring that criminals do not benefit from their crimes financially, as well as detailed coverage of every stage of the confiscation process.

This new edition has been fully updated to include all important legislative changes since the publication of the fourth edition. It includes a new chapter on bribery and corruption and covers all significant case law, including discussion on the ongoing inpact of R v Waya.

The new edition incorporates in-depth coverage of the relevant legislation, with analysis of the Serious Crime Act 2015 which gives effect to a number of legislative proposals set out in the Serious and Organised Crime Strategy published in October 2013 and, in doing so, expands the powers that the National Crime Agency, the police and other law enforcement agencies have to pursue, disrupt and bring to justice those engaged in organised crime.

The new edition contains carefully selected appendices, including extracts from the Proceeds of Crime Act 2002, and draft restraint, receivership and civil recovery orders.