The Struggle for Civil Liberties: Political Freedom and the Rule of Law in Britain, 1914-1945 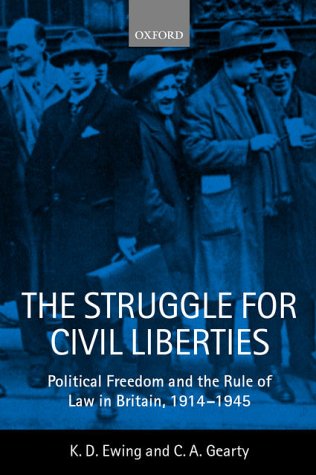 Print On Demand Title
It is widely believed that there was a golden age in which political freedom in Britain was protected by the rule of law, and by judges developing the common law in favour of individual liberty. In an uncompromising and withering account based on a wide range of official and unofficial sources, this path-breaking study by two of the country's leading civil liberties lawyers exposes the mythical nature of much of this traditional learning.

The Struggle for Civil Liberties: Political Freedom and the Rule of Law in Britain, 1914-1945 traces the hostile response of the executive and judicial branches of government to the various groups and individuals who confronted the power of the State in the first half of the twentieth century: the wartime peace movements, the Communist Party of Great Britain, the striking trade unionists in 1926, the hunger marches, and the Irish Nationalists. In addressing these issues, the study has a loud contemporary resonance, by placing in a new and alarming historical context the struggles for civil liberties that have been and are being fought by radical groups in contemporary British Society, and during the Thatcher decade in particular.

This book will change forever the way in which open-minded public lawyers think about their subject, and will require a fundamental re-examination of the foundations of the discipline.

Contents:
1: Introduction.
2: First World War.
3: The Communist Party of Great Britain.
4: The General Strike and its Aftermath.
5: Civil Liberties in the 1930s.
6: The Rise and Fall of Fascism