Tracing the Roles of Soft Law in Human Rights 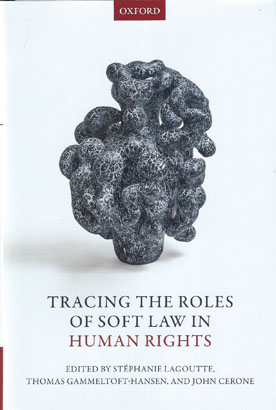 Soft law increasingly shapes and impacts the content of international law in multiple ways, from being a first step in a norm-making process to providing detailed rules and technical standards required for the interpretation and the implementation of treaties.

This is especially true in the area of human rights. While relatively few human rights treaties have been adopted at the UN level in the last two decades, the number of declarations, resolutions, conclusions, and principles has grown significantly. In some areas, soft law has come to fill a void in the absence of treaty law, exerting a degree of normative force exceeding its non-binding character.

In others areas, soft law has become a battleground for interpretative struggles to expand and limit human rights protection in the context of existing regimes. Despite these developments, little attention has been paid to soft law within human rights legal scholarship. Building on a thorough analysis of relevant case studies, this volume systematically explores the roles of soft law in both established and emerging human rights regimes.

Following introductory chapters that lay out the general conceptual framework, the book is divided in two parts. The first part focuses on cases that examine the role of soft law within human rights regimes where there are established hard law standards, its progressive and regressive effects, and the role that different actors play in the incubation process.

The second part focuses on the role of soft law in emerging areas of international law where there is no substantial treaty codification of norms. These chapters examine the relationship between soft and hard law, the role of different actors in formulating new soft law, and the potential for eventual codification.

Contents:
Thomas Gammeltoft-Hansen, Stephanie Lagoutte, and John Cerone: Introduction: Tracing the roles of soft law in human rights
1: John Cerone: A taxonomy of soft law
PART 1: Established human rights regimes
2: Kasey McCall-Smith: Interpreting international human rights standards - treaty body general comments as a chisel or hammer?
3: Ekaterina Yahyaoui Krivenko: The role and impact of soft law on the emergence of the prohibition of violence against women within the context of the CEDAW
4: Mátyás Bódig: Soft law, doctrinal development and the General Comments of the UN Committee on Economic, Social and Cultural Rights
5: Rachel Murray and Debra Long: The role and use of soft law instruments in the African human rights system
6: Bruce Oswald: The Copenhagen Process: some reflections concerning soft law
7: Peter Vedel Kessing: The use of soft law in regulating armed conflict: from jus in bello to 'soft law in bello'?
8: Megan Bradley and Angela Sherwood: Addressing and resolving internal displacement: reflections on a soft law
PART 2: Emerging human rights regimes
9: Felipe Gómez Isa: The role of soft law in the progressive development of indigenous peoples' rights
10: Léticia Villeneuve: Could the progressive 'hardening' of human rights soft law impair its further expansion? Insights from the UN Declaration of the Rights of Indigenous Peoples
11: Stéphanie Lagoutte: The UN Guiding Principles on Business and Human Rights - a confusing smart mix of soft and hard international human rights law
12: Christoph Good: Mission creeps: the (unintended) re-enforcement of the actor's discussion in international law through the expansion of soft law instruments in the business and human rights nexus
13: Anette Faye Jacobsen: Soft law within participation rights: tools in development
14: Sally Holt, Zdenka Machnyikova and John Packer: The role of soft law in minority rights protection and diversity management: reflections from practice