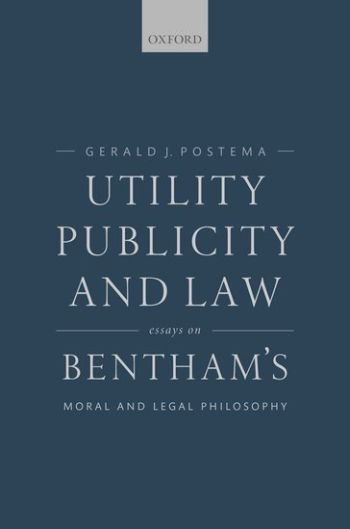 The essays in this volume offer a reassessment of Jeremy Bentham's strikingly original legal philosophy. Early on, Bentham discovered his 'genius for legislation' - 'legislation' included not only lawmaking and code writing, but also political and social institution building and engineering of public spaces for effective control of the exercise of political power. In his general philosophical work, Bentham sought to articulate a public philosophy to guide and direct all of his 'legislative' efforts.

Part I explores the philosophical foundations of his public philosophy: his theory of meaning and framework for analysis and definition of key concepts, his theory of human affections and motivations, and his utilitarian theory of value. It is argued that, while concepts of pleasure and happiness play nominal roles in his theory of value, concepts of publicity, equality, and interests emerge as the dominant concepts of his public philosophy. Part II explores several dimensions of Bentham's jurisprudence, including his radically revised command model of law, his early reflections on justice and law in adjudication, his theories of judicial evidence, constitutional rights, the rule of law, and international law. The concluding essay demonstrates the centrality of the notion of publicity in his moral, legal and political thought. Emerging from this study is a positivist legal theory and a utilitarian moral-political philosophy that challenge in fundamental ways contemporary understandings of those doctrines.

Contents:
PART I: FOUNDATIONS
1: Meaning, Analysis, and Exposition: The Technology of Thought
2: Human Psychology, Individual, and Social
3: Normative Theory: The Principle of Utility
4: Publicity and the Development of Bentham's Theory of Value
5: Bentham's Equality-Sensitive Theory of Value
6: Interests: Universal and Particular
PART II: JURISPRUDENCE
7: Utility, Public Rules, and Common-Law Adjudication
8: Utility and Command: Roots of Bentham's Universal Jurisprudence
9: Facts, Fictions, and Law: Foundations of the Law of Evidence
10: In Defense of 11: Utilitarian International Order
12: The Soul of Justice: Bentham on Publicity, Law, and the Rule of Law
13: Bentham: Theorist of Publicity