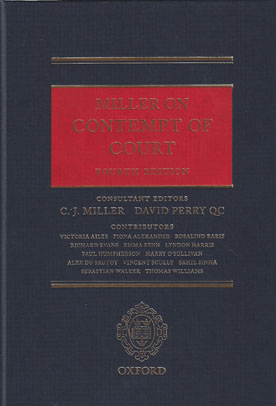 Contempt of court has been aptly described as the Proteus of the legal world, assuming an almost infinite diversity of forms. Its central concern is to protect the administration of justice in criminal and civil cases, but also to protect witnesses from being victimized and courts from being subjected to destructive criticism in the press, or disruptive conduct during their proceedings.

Professor Miller's classic work Contempt of Court gives a comprehensive treatment of the issues in this broad subject area including contempt in the face of the court, publication contempt, and civil contempt when orders are breached.

This new and updated edition has been written against the backdrop of transformations to the media and mass communication technology. Social media has changed day-to-day life almost beyond recognition, and its potential to prejudice criminal proceedings in particular has quickly become apparent.

The High Court and the Court of Appeal are considering with increasing frequency what steps might be appropriate to safeguard criminal trials in this context, which can include injunctions, orders made under the Contempt of Court Act 1981, and severe sanctions when members of the public find themselves in contempt. This edition incorporates the most recent case law in this area.

Through pragmatic and reliable analysis, this book provides the reader with an authoritative understanding of all aspects of this vital topic.