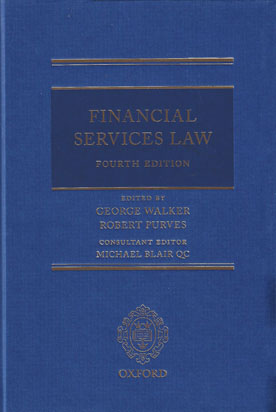 The most comprehensive single-volume practitioner reference work on financial regulation, Financial Services Law has been thoroughly revised and updated to take account of the major developments in a rapidly developing regulatory landscape.

The updated text analyses all of the substantial institutional and structural changes brought, or to be brought, into effect under the additional new key statutes adopted in the financial area including specifically the Financial Services (Banking Reform) Act 2013 and the Bank of England and Financial Services Act 2016.

Since the last edition there have been many developments at European level and the fourth edition takes full account of these including the Capital Requirements Directive IV, Insolvency II, and MiFID II. At domestic level the division of the FSA Handbook of Rules into the PRA Rulebook and the FCA Handbook has been covered in two new chapters.

There are also new chapters on 'Individual Accountability and Liability' following commencement of the Senior Managers and Certification Regimes, and on 'Consumer Credit' following the transfer of regulatory responsibility for this to the FCA. Additionally, the material on enforcement has been significantly developed in this new edition. Financial Services Law is the leading work on financial regulation for practitioners and scholars requiring a holistic treatment of the regime in the EU and UK.