Brexit: What Everyone Needs to Know 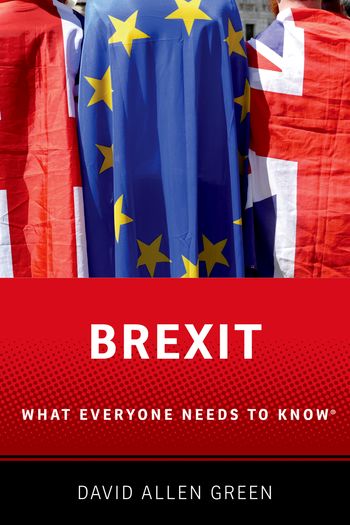 In the referendum of 23 June 2016, the UK voted to leave the European Union. However, in constitutional terms, nothing has changed. The Leave side won but Brexit has not been triggered. The UK remains a member of the EU. No formal negotiations have been held; no exit terms have been decided. Despite demands by leading EU figures, the EU cannot force the UK to send the formal Article 50 notification that would begin the process of leaving. It is even conceivable that no notification will ever be sent. The UK's prime minister has declared that 'Brexit means Brexit' - but the UK government is struggling to grapple with the problems of Brexit, and there is no obvious way out. How did this situation come about? What options does the UK now have? What does a Brexit mean for the UK and the EU, and for the UK's crucial relationships with overseas partners such as the US?

This book offers an accessible and unbiased guide to Brexit: the issues and events that led to the vote, the political turmoil that has resulted from it, and the crisis the UK now faces. It examines key debates over 'sovereignty', immigration, and UK contributions to the EU, which led to the Leave vote. It explains the controversy surrounding Article 50 of the EU treaty: what is the process necessary for leaving the EU, and how might the UK approach the monumental task of disentangling its legal system from the EU? It scrutinises the exit strategies being weighed up the UK government, and the fraught negotiations over free movement of people and access to the single market. What might the exit agreement look like? What are the implications of 'hard' Brexit or 'soft' Brexit-or no Brexit at all?

The book is a key reference for anyone seeking to understand the important and complex issues of Brexit, and its wide-ranging consequences.

Contents:
BREXIT - HOW DID THIS HAPPEN?
1: What was the background to the referendum vote? Why did a referendum take place there and then?
2: What was the result of the referendum result? How can this result be explained?
3: What is the political and legal significance of the vote?
4: What were the immediate political consequences of the referendum vote - from Cameron to May?
5: What was the immediate impact of the vote on UK's role in the EU and internationally?
6: What is the (relevant) historical background to United Kingdom's membership of the European Union? How did we get to this point? What else could have happened?
7: What difference does EU membership (really) make to the UK? And what differences does it not make?
8: What are the constitutional and legal relationships between the UK and the EU? Is the UK a 'sovereign power' in the EU? What does sovereignty mean, and how much control did the UK give away as an EU member?
9: What are the economic and trade relationships of the UK and the EU?
10: What are the economic and trade relationships of the UK and the non-EU world?
11: How do the UK and EU fit into the current system of international trade? Is it a good fit?
12: What does the "Internal Market" mean? How does this differ from, say, a customs union or a free trade area?
13: What does "freedom of movement" mean in the context of the EU? What does it not mean?
14: What are the key policy areas affected by UK membership of EU? For each of these, to what extent does it make a difference if UK is a member of EU or not?
15: What are the key policy areas not affected by UK membership of EU? What opt-outs does the UK already have?
BREXIT - WHAT IS THE TASK AHEAD?
16: Why is a Brexit plan needed? Is one needed? What happens without a plan?
17: What needs to go into any Brexit plan?
18: What is the overall process of withdrawal? What is the scale of the task?
19: Why does Article 50 matter? In what ways does it not matter?
20: What is the Article 50 process? What are the stages, and what will happen (and not happen) at each stage?
21: What is the debate over the legalities of Article 50 and why do the legalities matter? What is a "decision" and a "notification"?
22: Can Article 50 be revoked after it is triggered?
23: What are the possible alternatives to the Article 50 route?
24: What are the preliminary policy preparations for Brexit?
25: How is Whitehall being organised for the task ahead? What are the challenges for the UK civil service?
26: What will happen to the European Communities Act? How can EU law be distentangled from UK law?
27: What is the devolution context? Why do Scotland, Wales and Northern Ireland matter?
28: Why do Gibraltar and the overseas territories matter?
29: What will be the role of the City of London?
30: What are the key policy areas affected by Brexit?
31: What will be the role of the WTO and the existing multilateral trade system?
32: How will the UK will go about entering into new trade negotiations and deals? Are trade agreements really necessary? Why do trade agreements take so long?
33: What needs to be in the UK-EU deal? How wide a deal does it need to be?
34: What can be in any non-EU bilateral deals?
35: What is the importance of access to the Single Market? What would no access to a Single Market would look like?
36: What is the importance of the issue of free movement of people?
BREXIT - WHAT ARE THE POSSIBLE OUTCOMES?
37: What are the general factors which will affect the speed or lack of speed of Brexit? What are the possible timeframes and what will influence them?
38: What could go wrong and what risks need to be managed or eliminated?
39: What are the various models and forms of Brexit? EEA/EFTA/CETA/Customs Union/WTO terms?
40: Is it possible there would be no Brexit at all?
41: What are the possible none-Brexit escape routes?

Series: What Everyone Needs To Know