International Copyright and Neighbouring Rights: The Berne Convention and Beyond 3rd ed 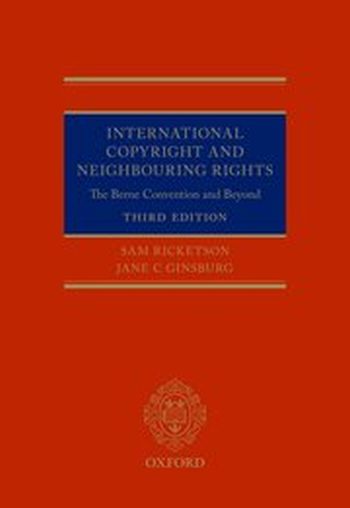 This comprehensive volume examines the international framework concerned with the protection of copyright and neighbouring rights. The focal point of this commentary is the Berne Convention for the Protection of Literary and Artistic Works 1886, which was last revised in 1971, but the treatment extends beyond to the related conventions that have grown out of, or are based on, Berne. These include; the WIPO Copyright Treaty 1996, the Rome Convention for the Protection of Phonogram Producers, Performers and Broadcasting Organizations 1961, the WIPO Performances and Phonograms Treaty 1996, and the 1994 Trade-Related Intellectual Property Rights Agreement (TRIPS Agreement) (an annexed agreement to the World Trade Organization). This edition also extends to conventions introduced since the publication of the previous edition, such as the Beijing Treaty on the Protection of Audiovisual Performances 2012, and the Marrakesh Treaty to Facilitate Access for Blind and Visually Impaired Readers 2013.

The analysis in the commentary is thematic and grounded in the history and development of each of the treaties considered. While its primary focus is upon the way in which the obligations contained in these public law instruments are to be interpretated and applied in domestic law, it also addresses in some detail the private international law aspects of the protection of works and neighbouring rights.

This new edition considers a number of developing areas, such as continuing work within the WIPO Standing Committee on Copyright and Related Rights on the matter of exceptions, limitations and the development of a new treaty on broadcasters, emerging discussions at both national and international levels about the matter of formalities, the beginnings of a movement in favour of broader protection of resale royalty rights, and more.