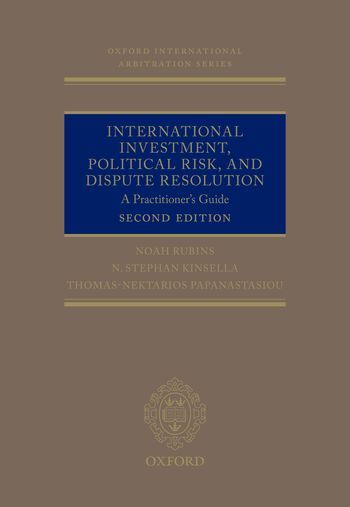 The second edition of International Investment, Political Risk and Dispute Resolution explores the multi-layered legal framework for the protection of foreign investment against political risk. The authors expertly analyse some of the key issues surrounding this subject, such as structuring transactions to minimize political risk, political risk insurance, state responsibility, treaties protecting foreign investment and human rights, and international arbitration between states and investors.

Since the previous edition was released in 2005, far more attention has been paid to these issues, in particular investor-state arbitration, as well as other current topics such as the interaction between international investment law and human rights. All chapters have been revised to take into account the number of new arbitration awards that have come to light and the massive volume of commentary on the subject of international investment arbitration since the first edition. The authors have carefully considered the latest theoretical approaches to foreign investment protection and the most intellectually challenging awards issued in the intervening decade, as well as the most recent practical guidance on the procedural recourse available to investors who face political risks. Additionally, this book contains a new chapter exploring the interaction between international investment law and the international human rights regime and considers whether there is a complementary or divergent result between competing fora.

This book is addressed to a wide audience, and is suitable as a primer for non-specialist practitioners seeking to familiarize themselves with international law pertaining to political risk. While appropriate for practitioner use, this book is also suitable for undergraduate students or for graduates who intend to specialize in international investment law.