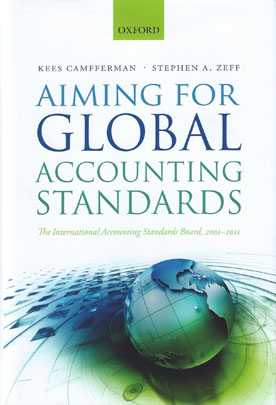 As a unique instance of a private-sector body setting standards with legal force in many jurisdictions, the IASB's rise to prominence has been accompanied by vivid political debates about its governance and accountability. Similarly, the IASB's often innovative attempts to change the face of financial reporting have made it the centre of numerous controversies.

This book traces the history of the IASB from its foundation as successor to the International Accounting Standards Committee (IASC), and discusses its operation, changing membership and leadership, the development of its standards, and their reception in jurisdictions around the world.

The book gives particular attention to the IASB's relationships with the European Union, the United States, and Japan, as well as to the impact of the financial crisis on the IASB's work. By its in-depth coverage of the history of the IASB, the book provides essential background information that will enrich the perspective of everyone who has to deal with IFRSs or the IASB at a technical or policy-making level.

Contents:
1. Introduction
2. Evolution of the IASC into the IASB
3. Setting up the IASB
4. The First Wave of Jurisdictional Adoptions of IFRSs
5. The IASB Sets its Agenda: 'Improvement, Convergence, Leadership'
6. Financial Instruments: The Confrontation with Europe
7. The IASC Foundation's First Constitution review: Debating Governance and Due Process
8. The United States Begins to Warm to the IASB
9. The IASB's Vexed Relation with Europe
10. Adopt or Adapt: Diversity in Acceptance of IFRSs
11. The IASB's Organization Matures
12. Concepts and Convergence: An Ever Closer Relation with the FASB
13. The IASB Survives the Financial Crisis
14. Preparing the IASB for the Second Decade
15. The Uncertain Path Towards a Single Global Standard
16. The IASB and the FASB Rush to Complete the Convergence Programme
17. Epilogue