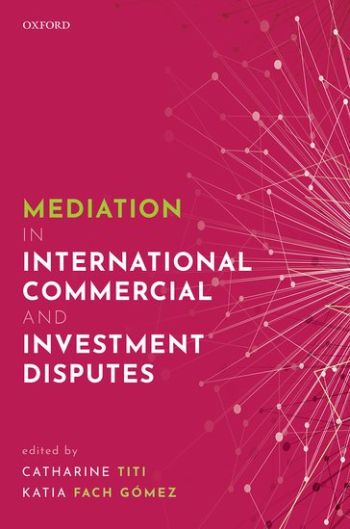 Mediation rules that have been in disuse begin to gain momentum, dispute settlement centres introduce and promote new mediation rules; the European Union is encouraging international mediation both in the commercial and investment sphere, and mediation provisions are included in secondary EU legislation and in the new EU international investment agreements (IIAs); a new initiative in the United Nations Commission on International Trade Law (UNCITRAL) aims to ensure enforcement of international commercial settlement agreements resulting from conciliation; the first investor-State disputes are mediated under the IBA rules; the International Centre for Settlement of Investment Disputes (ICSID)'s Conciliation mechanism is resorted to more often than in the past; the International Chamber of Commerce (ICC) has recently administered its first mediation case based on a bilateral investment treaty; and, a new training market on mediation is flourishing.

As a consequence, academics, investment treaty negotiators, lawyers and disputing parties are becoming increasingly aware of this alternative method of dispute settlement.

Mediation in Commercial and Investment Disputes addresses this theme that has never before been so topical. It brings together a line-up of outstanding, highly-qualified experts from academia, mediation and arbitration institutions, and international legal practice, who address the subject in all its complexity from a variety of angles.