Characters Before Copyright: The Rise and Regulation of Fan Fiction in Eighteenth-Century Germany 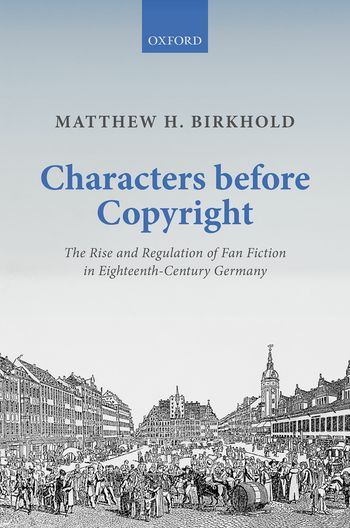 Situated between the decline of the privilege system and the rise of copyright, literary borrowing in eighteenth-century Germany has long been characterized as unregulated. Studying fan fiction, however, reveals an array of tacit rules governing the creation and consumption of literature, while also uncovering conceptions of literary property and authorship that scholars have overlooked. Characters before Copyright: The Rise and Regulation of Fan Fiction in Eighteenth-Century Germany is the first in-depth study of the history of fan fiction-literary works written by readers who appropriate pre-existing characters invented by other authors.

Because eighteenth-century authors themselves struggled with what to name these works-variously suggesting Fortsetzung, Anhang, and Beylage-this book deliberately imports the anachronistic term. Like fan fiction today, these appropriations took the form of prequels, sequels, and spinoffs. Undertaking close readings of literary and legal texts, this volume documents the widespread practice of writing fan fiction and reconstructs the contemporaneous debate about this much-disputed literary phenomenon.

Analyzing the evolving reading, writing, and consumer habits of late-eighteenth century Germany, Characters before Copyright scrutinizes the social, economic, and aesthetic changes that fostered the rapid rise of fan fiction after 1750. Then, using an ethnographic approach borrowed from legal and literary anthropology, this book identifies the unwritten, extra-legal customary norms that governed the production of these works. It thus reinterprets the 'literary commons' of the eighteenth century, arguing that what may appear to have been the free circulation of characters was actually circumscribed by a complex and exacting set of rules and conditions. These rules translated into a unique type of literature that gave rise to remarkable forms of collaborative authorship and originality distinct from those associated with the Romantic author.

Ultimately, Characters before Copyright provides a new perspective on the eighteenth-century book trade and the rise of intellectual property, re-evaluating the concept of literary property, the history of moral rights, and the tradition of free culture.

Contents:
Introduction
Part I
1: The Book Market, the Good Reader, and the Rise of Fan Fiction
2: The Stakes of Fan Fiction
3: Customary Norms and Rules
4: Sanctions and Strategies of Control
Part II
5: Fan-Fiction in the Eighteenth-Century Literary Landscape
6: Fictional Characters in the Eighteenth-Century Literary Commons
An Interlude in Lieu of a Conclusion
Appendix
Works Cited