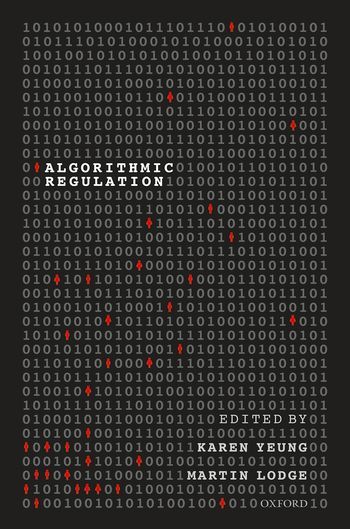 As the power and sophistication of of 'big data' and predictive analytics has continued to expand, so too has policy and public concern about the use of algorithms in contemporary life.

This is hardly surprising given our increasing reliance on algorithms in daily life, touching policy sectors from healthcare, transport, finance, consumer retail, manufacturing education, and employment through to public service provision and the operation of the criminal justice system.

This has prompted concerns about the need and importance of holding algorithmic power to account, yet it is far from clear that existing legal and other oversight mechanisms are up to the task.

This collection of essays, edited by two leading regulatory governance scholars, offers a critical exploration of 'algorithmic regulation', understood both as a means for co-ordinating and regulating social action and decision-making, as well as the need for institutional mechanisms through which the power of algorithms and algorithmic systems might themselves be regulated.

It offers a unique perspective that is likely to become a significant reference point for the ever-growing debates about the power of algorithms in daily life in the worlds of research, policy and practice. The range of contributors are drawn from a broad range of disciplinary perspectives including law, public administration, applied philosophy, data science and artificial intelligence.

Taken together, they highlight the rise of algorithmic power, the potential benefits and risks associated with this power, the way in which Sheila Jasanoff's long-standing claim that 'technology is politics' has been thrown into sharp relief by the speed and scale at which algorithmic systems are proliferating, and the urgent need for wider public debate and engagement of their underlying values and value trade-offs, the way in which they affect individual and collective decision-making and action, and effective and legitimate mechanisms by and through which algorithmic power is held to account.