Legislation at Westminster: Parliamentary Actors and Influence in the Making of British Law 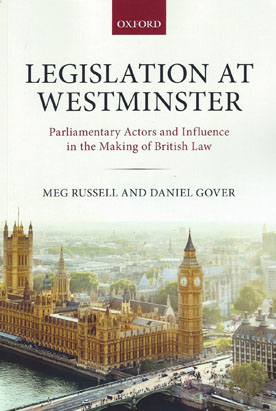 The Westminster parliament is a highly visible political institution, and one of its core functions is approving new laws. Yet Britain's legislative process is often seen as executive-dominated, and parliament as relatively weak. As this book shows, such impressions can be misleading.

Drawing on the largest study of its kind for more than forty years, Meg Russell and Daniel Gover cast new light on the political dynamics that shape the legislative process. They provide a fascinating account of the passage of twelve government bills - collectively attracting more than 4000 proposed amendments - through both the House of Commons and House of Lords.

These include highly contested changes such as Labour's identity cards scheme and the coalition's welfare reforms, alongside other relatively uncontroversial measures. As well as studying the parliamentary record and amendments, the authors draw from more than 100 interviews with legislative insiders.

Following introductory chapters about the Westminster legislative process, the book focuses on the contribution of distinct parliamentary 'actors', including the government, opposition, backbenchers, select committees, and pressure groups. It considers their behaviour in the legislative process, what they seek to achieve, and crucially how they influence policy decisions. The final chapter reflects on Westminster's influence overall, showing this to be far greater than commonly assumed. Parliamentary influence is asserted in various different ways - ranging from visible amendments to more subtle means of changing government's behaviour.

The book's findings make an important contribution to understanding both British politics and the dynamics of legislative bodies more broadly. Its readability and relevance will appeal to both specialists and general readers with interests in politics and law, in the UK and beyond.