Torts and Other Wrongs 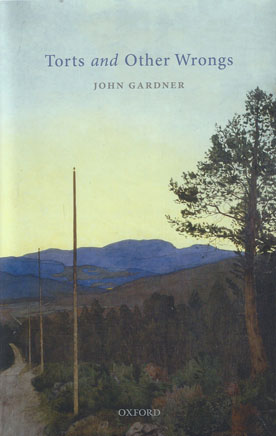 Torts and other Wrongs is a collection of eleven of the author's essays on the theory of the law of torts and its place in the law more generally.

Two new essays accompany nine previously published pieces, a number of which are already established classics of theoretical writing on private law. Together they range across the distinction between torts and other wrongs, the moral significance of outcomes, the nature and role of corrective and distributive justice, the justification of strict liability, the nature of the reasonable person standard, and the role of public policy in tort adjudication.

Though focussed on the law of torts, the wide-ranging analysis in each chapter will speak to theorists of private law more generally.

Contents:
1: Torts and Other Wrongs
2: What is Tort Law For? The Place of Corrective Justice
3: What is Tort Law For? The Place of Distributive Justice
4: Backwards and Forwards with Tort Law
5: Obligations and Outcomes in the Law of Torts
6: Some Rule-of-Law Anxieties about Strict Liability in Private Law
7: The Negligence Standard: Political not Metaphysical
8: The Mysterious Case of the Reasonable Person
9: The Many Faces of the Reasonable Person
10: Public Interest and Public Policy in Private Law
11: Breach of Contract as a Special Case of Tort