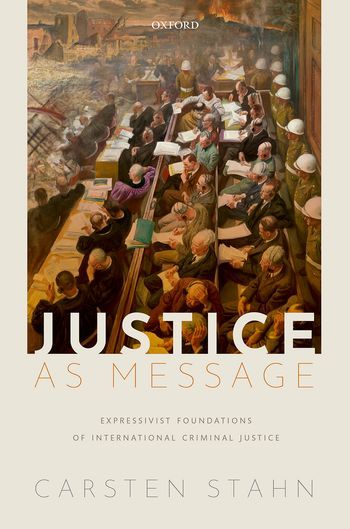 International criminal justice relies on messages, speech acts, and performative practices in order to convey social meaning. Major criminal proceedings, such as Nuremberg, Tokyo, and other post-World War II trials have been branded as 'spectacles of didactic legality'. However, the expressive and communicative functions of law are often side-lined in institutional discourse and legal practice. This innovative work brings these functions centre-stage, developing the idea of justice as message and outlining the expressivist foundations of international criminal justice in a systematic way.

Professor Carsten Stahn examines the origins of the expressivist theory in the sociology of law and the justification of punishment, its articulation in practice, and its broader role as method of international law. He shows that expression and communication is not only an inherent part of the punitive functions of international criminal justice, but is represented in a whole spectrum of practices: norm expression and diffusion, institutional actions, performative aspects of criminal procedures, and repair of harm. He argues that expressivism is not a classical justification of justice or punishment on its own, but rather a means to understand its aspirations and limitations, to explain how justice is produced and to ground punishment rationales. This book is an invitation to think beyond the confines of the legal discipline, and to engage with the multidisciplinary foundations and possibilities of the international criminal justice project.