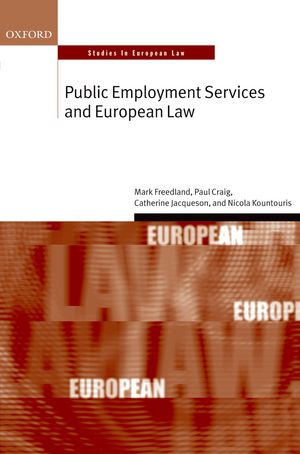 How can the EU's community of welfare states adapt their public policies to economic globalization? What happens when the economic and social aims of the EU come into conflict? This book examines the developing legal regimes and regulation of public services in the UK and other European countries. Public services are examined though a case-study of the complex area of public employment services. These are job-placement and vocational training services which aim to maximize employment and minimize unemployment within EU member States' Active Labour Market policies.

Employment services are at the centre of a complex web of rules in both hard and soft forms of law deriving from the EU, national public law and from private, and at times contractual, agreements. They also lie at the crossroads of a series of trends in regulation, and priorities have been inspired by an array of conflicting policy rationales. These policy rationales include the establishment of an open and competitive European internal market, the establishment of an efficient welfare state, the scaling down of state administrative machinery, the fulfilment of core public service responsibilities, and the creation of public-private partnerships.

Public employment services provide a highly informative and novel case study of the interaction and conflict between the economic and social aims of the EU and between regulation at national and supranational levels, and the changing forms which this regulation has taken.

Accountability in EU Security and Defence: The Law and Practice of Peacebuilding
Carolyn Moser
ISBN 9780198844815
Published May 2020
Oxford University Press
£84.00