Labour Law in an Era of Globalization New ed 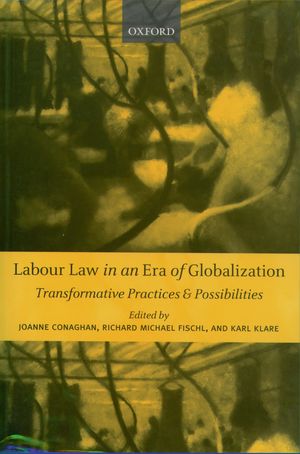 Throughout the industrial world, the discipline of labour law has fallen into deep philosophical and policy crisis, at the same time as new theoretical approaches make it a field of considerable intellectual ferment. Modern labour law evolved in a symbiotic relationship with a postwar institutional and policy agenda, the social, economic, and political underpinnings of which have gradually eroded in the context of accelerating international economic integration and wage-competition, a decline in the capacity of the nation-state to steer economic progress, the ascendancy of fiscal austerity and monetarism over Keynesian/welfare state politics, the appearance of post-industrial production models, the proliferation of contingent employment relationships, the fragmentation of class-based identities and emergence of new social movements, and the significantly increased participation of women in paid work.;These developments offer many appealing possibilities - the opportunity, for example, to contest the gender division of labour and re-think the boundaries between immigration and labour policy. But they also hold out quite threatening prospects - including increased unemployment and inequality and the decline of workers' organizations and social participation - in the context of proliferating constraints imposed by international financial pressures on enacting redistributive social and economic policies. New strategies must be developed to meet these challenges.;These essays - which are the product of a transnational comparative dialogue among academics and practitioners in labour law and related legal fields, including social security, immigration, trade, and development - identify, analyse, and respond to some of the conceptual and policy challenges posed by globalization.

Contents:
PART I. LABOUR LAW IN TRANSITION; 1. The Horizons of Transformative Labour and Employment Law; 2. Labour Law at the Century's End: An Identity Crisis?
PART II. CONTESTED CATEGORIES: WORK, WORKER, AND EMPLOYMENT; 3. Women, Work, and Family: A British Revolution?; 4. Who Needs Labour Law? Defining the Scope of Labour Protection; 5. Beyond Labour Law's Parochialism: A Re-envisioning of the Discourse of Distribution
PART III. GLOBALIZATION AND ITS DISCONTENTS; 6. Feminization and Contingency: Regulating the Stakes of Work for Women; 7. Seeking Post-Seattle Clarity - and Inspiration; 8. Death of a Labour Lawyer?
PART IV. SAME AS THE OLD BOSS? THE FIRM, THE EMPLOYMENT CONTRACT, AND THE 'NEW' ECONOMY; 9. The Many Futures of the Contract of Employment; 10. From Amelioration to Transformation: Capitalism, the Market, and Corporate Reform; 11. Death and Suicide from Overwork: The Japanese Workplace and Labour Law; 12. A Closer Look at the Emerging Employment Law of Silicon Valley's High-Velocity Labour Market; 13. 'A Domain into which the King's writ does not seek to run': Workplace Justice in the Shadow of Employment-at-Will
PART V. BORDER/STATES: IMMIGRATION, CITIZENSHIP, AND COMMUNITY; 14. The Limits of Labour Law in a Fungible Community; 15. Immigration Policies in Southern Europe: More State, Less Market?; 16. The Imagined European Community: Are Housewives European Citizens?; 17. Critical Reflections on 'Citizenship' as a Progressive Aspiration
PART VI. LABOUR SOLIDARITY IN AN ERA OF GLOBALIZATION: OPPORTUNITIES AND CHALLENGES; 18. The Decline of Union Power - Structural Inevitability or Policy Choice?; 19. The Voyage of the Neptune Jade: Transnational Labour Solidarity and the Obstacles of Domestic Law; 20. Mexican Trade Unionism in a Time of Transition; 21. A New Course for Labour Unions: Identity-based Organizing as a Response to Globalization; 22. Difference and Solidarity: Unions in a Postmodern Age
PART VII. LAYING DOWN THE LAW: STRATEGIES AND FRONTIERS; 23. Is There a Third Way in Labour Law?; 24. Private Ordering and Workers' Rights in the Global Economy: Corporate Codes of Conduct as a Regime of Labour Market Regulation; 25. Emancipation through Law or the Emasculation of Law? The Nation-State, the EU, and Gender Equality at Work; 26. Social Rights, Social Citizenship, and Transformative Constitutionalism: A Comparative Assessment; Index