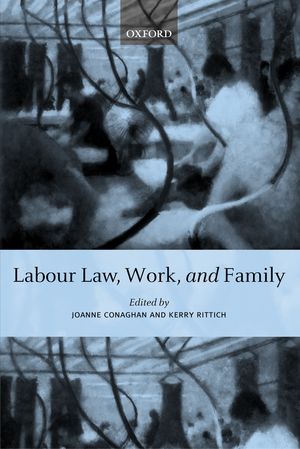 In recent years, gender has emerged as an important focus of attention in discourse in and around labour law. Gender is gradually moving from the margin to the mainstream of labour law debate, particularly with the development of a 'family-friendly' policy agenda. This book consists of a series of essays from an international selection of leading legal scholars exploring the shifting boundary between work and family from a labour law perspective.

The object is to assess the global implications for labour law and policy of women's changing role in paid and unpaid work. The approaches adopted by the contributors' are diverse, both conceptually and geographically, encompassing analyses from Australia, North America, Canada, the UK, Europe and Japan, and including national and supra-national perspectives. Key themes informing the collection as a whole are the re-positioning of unpaid care work as integral to the performance and structure of productive activity; and consideration of the implications of recognizing the interdependence of work and family activities.

In this way, the book seeks to develop a central theme from the previously published 'Labour Law in an Era of Globalization' (Conaghan, Fischl and Klare, eds. OUP), as part of an ongoing exploration into the distributive implications of economic and political globalization.

Contents:
1. Introduction: Interrogating the Work/Family Divide
I SITUATING DEBATE ABOUT WORK AND FAMILY
2. Work, Family, and the Discipline of Labour Law
3. Equity and Efficiency: International Institutions and the Work/Family Nexus
II REIMAGINING THE WORKER
4. Work/Family, Australian Labour Law, and the Normative Worker
5. The Right to Flexibility
6. ReCommodifying Time: Working Hours of 'Live-in' Domestic Workers
7. The Family Economy versus the Labour Market (or Housework as a Legal Issue)
8. Gender and Diversification of Labour Forms in Japan
9. Poor Women's Work Experiences: Gaps in the 'Work/Family' Discussion
III 'FAMILY-FRIENDLY' LABOUR LAW
10. Work, Family, and Parenthood: The European Union Agenda
11. Taking Leave: Work and Family in Australian Law and Policy
12. A New Gender Contract? Work/Life Balance and Working-Time Flexibility
13. Work and Family Issues in the Transitional Countries of Central and Eastern Europe: The Case of Hungary
14. Issues of Work and Family in Japan
IV CONCLUSION: A CAUTIONARY TALE
15. A Woman's World