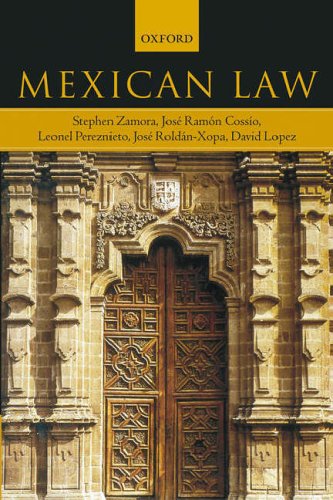 Mexican Law provides an overview of the Mexican legal system. It sets forth the basic rules and legal doctrines, surveys the key institutions that make and enforce the law in Mexico, and places them in their cultural context. It makes frequent comparisons to United States legal doctrines and institutions, and provides a foundation for understanding the role of law and legal institutions in shaping public and private life in Mexico.

The volume surveys both public and private law, and provides examples of the practical application of the law. It discusses the discrepancies that exist between the written law (and the theories that underly it) and its application. Topics covered range from an overview of legal history to specific subjects such as labor law, family law, and constitutional rights.

The volume also discusses the development of the Mexican legal system in the context of the dramatic internal political changes of the last two decades, which, coupled with the increased integration of Mexico with the world economy (and especially with that of the United States), have resulted in dramatic changes in the role of law and in the operation of legal institutions.

The book discusses changes in the legislature and judiciary, which have assumed greater importance at the expense of;executive power, and also surveys new institutions that have been created in an attempt to limit authoritarian control of Mexican society. In this way, it demonstrates how the legal system has been shaped by Mexico's rich history and unique socio-economic circumstances.