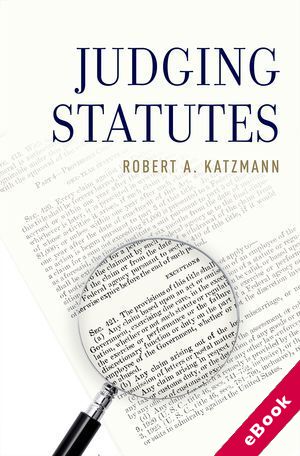 Over the last twenty-five years, there has been a spirited debate in the courts, Congress, and in the academy about how to interpret federal statutes, the laws of Congress. Federal judges spend a considerable amount of time trying to understand Congress's meaning.

Just as Congress produces laws, so courts are called on to interpret them. When the language of the statute is unambiguous, then, the job of the judge is generally straightforward. But when-as often happens-the statute is ambiguous, the interpretative task is not obvious.

How a judge interprets statutes - sticking only to the text when the language is ambiguous, or going beyond the text to legislative materials - is of fundamental importance. For the methodology of interpretation can affect the outcome and thus whether the law has been construed consistently with Congress's meaning. Justice Scalia has fueled the debate, arguing that courts should look to the text of the statute and to virtually nothing else.

In Judging Statutes Chief Judge Robert A. Katzmann of the U.S Court of Appeals for the Second Circuit, respectfully disagrees. Drawing upon his interdisciplinary background in law and political science, he argues that our constitutional system charges Congress with enacting laws; so, how Congress makes its purposes known, through text and reliable accompanying materials should be respected.

Judge Katzmann contends that there has been scant consideration given to what is critical as courts interpret statutes - an appreciation of how Congress actually functions and signals its meaning, and what Congress expects of those interpreting its laws.

Judging Statutes explores how Congress works; how agencies construe legislation; and examines two interpretative approaches, purposivsm and textualism. The author discusses cases in which he was the writing judge and which the Supreme Court reviewed, and concludes with some suggestions to promote understanding between courts and Congress.