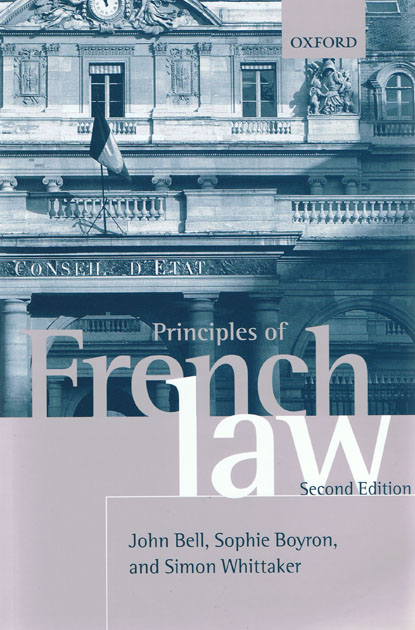 Principles of French Law offers a comprehensive introduction to French law and the French legal system in terms which a common lawyer can understand. The authors give an explanation of the institutions, rules and techniques that characterize the major branches of French law. The chapters provide the reader with a clear sense of the questions that French lawyers see as important and how they would answer them.

In the ten years since the publication of the first edition, French law has changed in significant ways. European Union law and the European Convention on Human Rights have had a significant impact, especially on procedural law and family law. There has been a new Commercial Code, major legislation on divorce, succession and criminal law, as well as significant developments in the Constitution. In addition, there have been considerable developments in the case-law and a much discussed proposal for reform of major areas of the law of obligations.

The chapters present not only the rules of law, but, where appropriate, the principles and values underlying the system. Considerable use is made of juristic literature and of examples from French case law.

The book is designed for students studying French law at both undergraduate and postgraduate level, and as preliminary reading for students about to study in France. It will also serve as an initial point of reference for scholars embarking on a study of French law.