Now in a single portable volume, the second edition of English Private Law includes all the recent developments since the publication of the first edition and the two supplements, the last of which published in 2003. It has been expanded to include coverage of a number of key areas that were previously not addressed, including; insurance, banking and carriage of goods by land and air. In addition, the chapters on land and companies have undergone extensive revision and the section on civil procedure has been fully revised to reflect current law and practice. No other single text provides such comprehensive and lucid coverage of the whole of English private law - the book's depth of analysis, combined with its ease of reference, make it a favourite among acadmics and students worldwide.

The second edition of English Public Law acts as an accessible first point of reference for practitioners approaching a public law issue for the first time, whilst simultaneously providing a lucid, concise and authoritative overview of all the key areas of public law (constitutional, administrative, human rights, and criminal law) within one single portable volume. The second edition has been fully revised and updated to take into account all key legislative and procedural changes since 2004, including:-

Both books are an ideal quick reference for practitioners to fall back on when a client raises a point outside their normal area of expertise as well as for academics, overseas libraries, and practitioners overseas who want a one-stop resource on English private and public law. 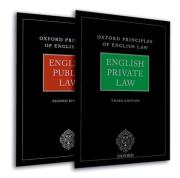