Broken Engagements: The Action for Breach of Promise of Marriage and the Feminine Ideal, 1800-1940 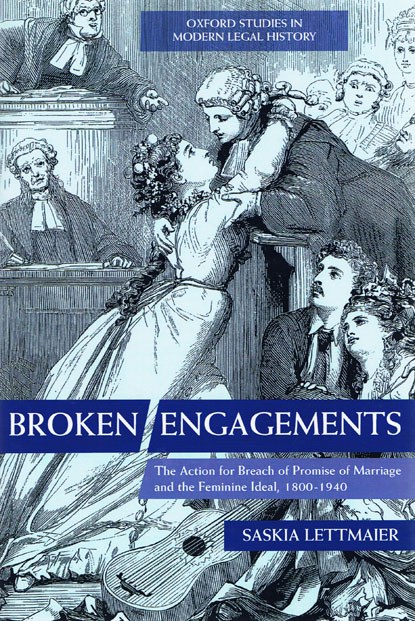 The common law action for breach of promise of marriage originated in the mid-seventeenth century, but it was not until the nineteenth century that it rose to prominence and became a regular feature in law courts and gossip columns. By 1940 the action was defunct, it was inconceivable for a respectable woman to bring such a case before the courts. What accounts for this dramatic rise and fall?

This book ties the story of the action's prominence and decline between 1800 and 1940 to changes in the prevalent conception of woman, her ideal role in society, sexual relations, and the family. It argues that the idiosyncratic breach-of-promise suit and Victorian notions of ideal femininity were inextricably, and fatally, entwined.

It presents the nineteenth-century breach-of-promise action as a codification of the Victorian ideal of true womanhood and explores the longer-term implications of this infusion of mythologized femininity for the law, in particular for the position of plaintiffs.

Surveying three consecutive time periods - the early nineteenth century, the high Victorian and the post-Victorian periods - and adopting an interdisciplinary approach that combines the perspectives of legal history, social history, and literary analysis, it argues that the feminizing process, by shaping a cause of action in accordance with an ideal at odds with the very notion of women going to law, imported a fatal structural inconsistency that at first remained obscured, but ultimately vulgarized and undid the cause of action.