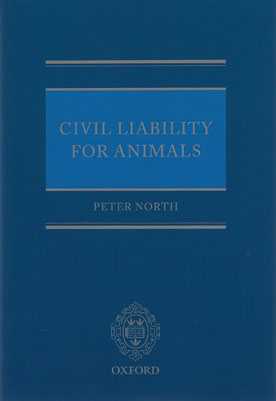 A comprehensive analysis of liability for animals this book covers harm done by dangerous and straying animals including both dangerous and non-dangerous species.

Including a separate chapter on special provisions relating to dogs it provides unique guidance from an internationally renowned legal scholar. The book takes account of the decisions of the courts which have applied, interpreted and explained the Animals Act 1971 over the past four decades including the House of Lords decision in Mirvahedy v Henley (2003).

Liability for animals which are not members of a dangerous species but which, in the event, may have been proved to be dangerous is a matter of particular interest and concern. The book addresses matters such as harm done by animals in the course of hunting as well as decisions on a number of non-statutory aspects of the law of animals.

The book includes the primary material of the Animals Act, 1971 making it a comprehensive point of reference on this subject.

An earlier version of this book, called The Modern Law of Animals, was published in 1972 just after the Animals Act 1971 came into force. Although the legislation has remained substantially unamended, there has been a steady flow of case law on the meaning and operation of the provisions of the Act.