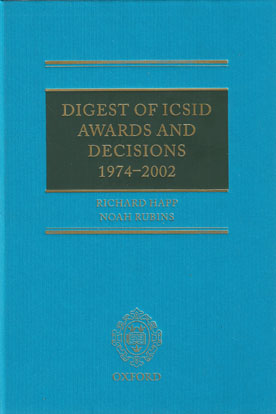 Investment arbitration has become the primary means of settling disputes between states and foreign investors. The majority of those arbitration proceedings take place before tribunals of the International Centre for the Settlement of Investment Disputes (ICSID).

This book provides the reader with a reliable reference guide containing concise summaries of the facts and holdings of ICSID Tribunals in the years 1974-2002. This period saw some of the most controversial and interesting ICSID awards and decisions, such as those in the Tradex, Metalclad, and Salini cases. This jurisprudence has significantly influenced the application of the ICSID Convention and been the subject of much scholarly debate.

The summaries provide quick access to the details of the case, removing the need to read the full text of the award or decision until its relevance is known. Extensive cross-references and footnotes allow easy navigation and facilitate in-depth research by giving a valuable starting point.

The book also includes analytical chapters tracing the development of procedural and substantive issues and assessing the 'precedent' value of the decisions. By analysing the awards and decisions in the light of subsequent developments, the authors also identify those which have withstood the test of time.