Accountability in the Contemporary Constitution 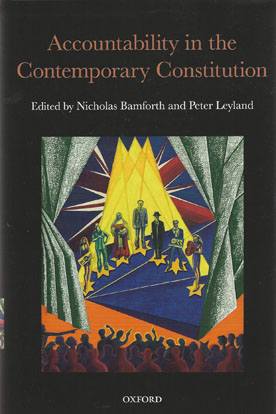 Accountability is regarded as a central feature of modern constitutionalism. At a general level, this prominence is perhaps unsurprising, given the long history of the idea.

However, in many constitutional democracies, including the UK and the USA, it has acquired a particular resonance in contemporary circumstances with the declining power of social deference, the expanding reach of populist accountability mechanisms, and the increasing willingness of citizens to find mechanisms for challenging official decision-making.

These essays, by public law scholars, seek to explore how ideas of and mechanisms associated with accountability play a part in the contemporary constitution. While the majority of contributors concentrate on the United Kingdom, others provide comparative discussion with particular reference to the United States and aspects of European Union law.

Further chapters explore the public service principle, the impact of new public management on public service delivery, and the relationship between accountability and regulation. Finally accountability is discussed in the light of constitutional reform including the challenges posed by the 'multi-layered' government at the supra national level of EU membership and sub-national national levels of devolution and local government.