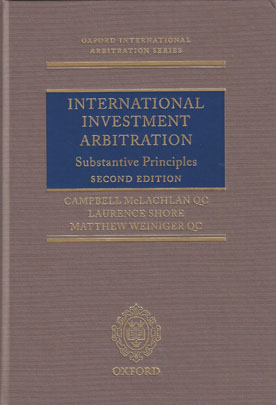 This is the long-awaited second edition of this widely-referenced work on the substantive law principles of investment treaty arbitration. It forms a detailed critical review of the substantive principles of international law applied by investment arbitration tribunals, and a clear and comprehensive description of the present state of the law. The first edition met with immediate success as a result of the authors' achievement in describing and analysing the volume of law created, applied and analysed by tribunals. The second edition is fully updated to take account of the arbitration awards rendered in the period since 2007. Written by an internationally recognised author team, it is now the most comprehensive and up to date work in its field and no practitioner or academic can afford to be without it.

Key areas of coverage include: the instruments under which investment disputes arise; the legal basis of treaty arbitration; dispute resolution and parallel proceedings; who is a foreign investor, including nationality issues and foreign control; what is an investment; investors' substantive rights, including fair and equitable treatment; expropriation; compensation and remedies.

Arbitration of overseas investment disputes is one of the fastest growing areas of international dispute resolution. The exponential growth of international investment in recent years has led to the signature of over two thousand Bilateral Investment Treaties (BITs) between foreign states, in addition to a wealth of multilateral treaties and other forms of concession agreements. The legal principles that have developed in this area are subject to intense debate, and are still in a state of flux. While tribunals routinely state that they are applying principles of public international law to determine disputes, many of the principles applied have only been developed recently in the context of investment treaty arbitrations, and tribunals are often guided more by the approaches taken by other tribunals, than by pre-existing doctrines of public international law. International Investment Arbitration: Substantive Principles is an important contribution to the collection and codification of the current state of practice in this field.