Judge and Jurist: Essays in Memory of Lord Rodger of Earlsferry 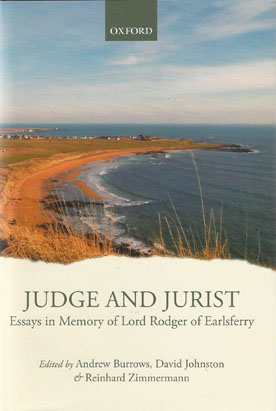 Lord Rodger of Earlsferry was a distinguished judge and scholar. He was a Justice of the Supreme Court of the United Kingdom and the author of many high quality law journal articles and two books.

Written in memory of Lord Rodger, this collection contains 47 essays by Lord Rodger's friends and colleagues from the UK and Europe. The essays reflect Lord Rodger's role as a leading judge and also his wide-ranging academic interests including Roman law, Scots law and legal history, and a miscellany of other topics.

The authors in this volume are leading academics or judges, and a particularly notable feature is the nine essays written by Supreme Court justices. As the highest judges in the UK they provide a unique insight into the work of the Supreme Court, as well as Lord Rodger's work in the Court.

The book also includes the memorial tributes to Lord Rodger which explain his remarkable legal career, including his roles as Lord Advocate (Senior Law Officer of Scotland) Lord President of the Court of Session, Lord of Appeal in Ordinary and, finally, Justice of the UK Supreme Court.

The essays include personal reminiscences of Lord Rodger, helping the reader to understand why he was so highly regarded and why his untimely death has dealt such a devastating blow to law in the UK.