Humanizing the Laws of War: Selected Writings of Richard Baxter 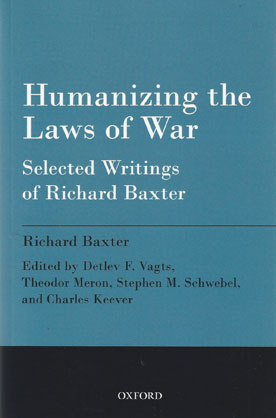 This book celebrates the scholarship of Richard Baxter, former Judge of the International Court of Justice and former Professor of International Law at Harvard Law School.

The volume brings together Professor Baxter's writings on the laws of war, on which he was one of the most influential scholars of the twentieth century. The collection of essays contained in this book once again makes his exceptional writings available to scholars and students in the field. His work remains timely and relevant to today's issues, and offers many analyses which have been borne out in subsequent years.

It includes, amongst many wide-ranging topics within the laws of war, Baxter's studies of the Geneva Conventions, human rights in times of war, and the legal problems of international military command.

Featuring a new introduction by Professor Detlev Vagts exploring the importance of Baxter's writings, and a Bibliographical Note by Judge Stephen Schwebel assessing Baxter's life, this book is essential reading for scholars and students of international humanitarian law.

Contents:
1. Introduction
2. Bibliographical Note
3. The Duty of Obedience to the Belligerent Occupant
4. So-Called 'Unprivileged Belligerency': Spies, Guerrillas, and Saboteurs
5. The Municipal and International Law Basis of Jurisdiction Over War Crimes
6. Constitutional Forms and Some Legal Problems of International Military Command
7. The Geneva Conventions of 1949
8. The First Modern Codification of the Law of War: Francis Lieber and General Order No.
100.
9. Forces for Compliance with the Law of War
10. Legal Aspects of the Geneva Protocol of 1925
11. Legal Aspects of Arms Control Measures Concerning the Missile Carrying Submarines and Anti-Submarine Warfare
12. Law of War
13. Perspective - The Evolving Laws of Armed Conflicts
14. Ius in Bello Interno: the Present and Future Law
15. The Geneva Conventions of 1949 and Wars of National Liberation
16. Humanitarian Law or Humanitarian Politics? The 1974 Diplomatic Conference on Humanitarian Law
17. Armistices and Other Forms of Suspensions of Hostilities
18. Human Rights in War
19. Modernizing the Law of War