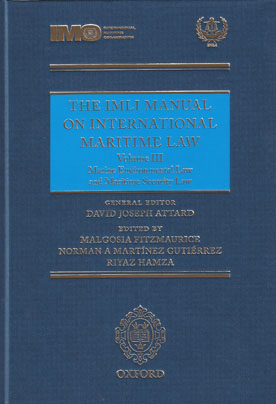 This three-volume IMLI Manual on International Maritime Law presents a systematic analysis of the history and contemporary development of international maritime law by leading contributors from across the world.

The first part of Volume III deals in depth with issues of most fundamental importance in the contemporary world, namely how to protect the marine environment from pollution from ships, land-based sources, seabed activities, and from or through air.

In explaining these types of pollution, various conventions concluded under the auspices of the IMO (such as MARPOL 73/78 and the 1972 London Convention) and soft law documents are analysed. The volume also includes chapters on the conventions relating to pollution incident preparedness, response, cooperation, and the relevance of regional cooperation. It additionally discusses liability and compensation for pollution damage.

The second part of volume III examines an issue of increasing importance in a world threatened by terrorism, piracy, and drug-trafficking. Chapters in this part cover the topics of piracy; stowaways; human trafficking; illicit drugs; terrorism; military uses of the sea; and new maritime security threats, such as the illegal dumping of hazardous wastes and toxic substances, as well as illegal, unreported, and unregulated fishing.