From the Bottom Up: Selected Essays 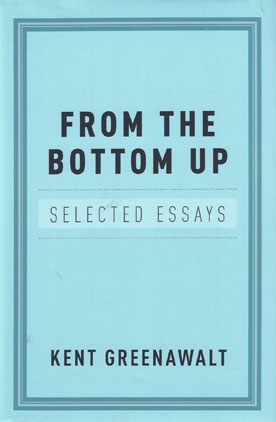 Kent Greenawalt's From the Bottom Up constitutes a collection of articles and essays written over the last five decades of his career.

They cover a wide range of topics, many of which address ties between political and moral philosophy and what the law does and should provide. A broad general theme is that in all these domains, what really is the wisest approach to difficult circumstances often depends on the particular issues involved and their context.

Both judges and scholars too often rely on abstract general formulations to provide answers. A notable example in political philosophy was the suggestion of the great and careful scholar, John Rawls, that laws should be based exclusively on public reason.

The essays explain that given uncertainty of what people perceive as the line between public reason and their religion convictions, the inability of public reason to resolve some difficulty questions, such as what we owe to higher animals, and the feeling of many that their religious understanding should count, urging exclusive reliance on public reason is not a viable approach. Other essays show similar problems with asserted bases for legal interpretations and the content of provisions such as the First Amendment.

Contents:
1. What Are Public Reasons
2. On Religion and Politics in Liberal Democracies
3. Religion and Public Reasons: Making Laws and Evaluating Candidates
4. How Persuasive is Natural Law Theory?
5. Natural Law and Public Reasons
6. Hart's Rule of Recognition and the United States
7. Too Thin and Too Rich: Distinguishing Features of Legal Positivism
8. Legal Enforcement of Morality
9. Law and Objectivity
10. How Empty is the Idea of Equality?
11. Prescriptive Equality: Two Steps Forward
12. From the Bottom Up
13. Distinguishing Justifications from Excuses
14. Promise, Benefit, and Need: Ties that Bind Us to the Law
15. Punishment
16. A Vice of Its Virtues
17. Clear and Present Danger and Criminal Speech
18. Free Speech Justifications
19. Insults and Epithets: Are they Protected Speech?
20. Five Questions about Religion Judges are Afraid to Ask
21. Religious Toleration and Claims of Conscience