Comparative Law as Transnational Law: A Decade of the German Law Journal 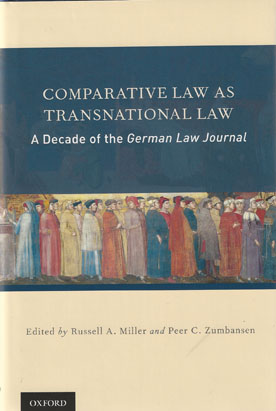 In Comparative Law as Transnational Law: A Decade of the German Law Journal Russell A. Miller and Peer C. Zumbansen have assembled the works of scholars from around the world, forming a richly contextual demonstration of the increasing encounters and tensions among legal cultures.

In recognizing the lack of consensus on how to define transnational law, Miller and Zumbansen have carefully selected works that originally appeared in the German Law Journal in order to help readers to grasp the challenges of defining transnational law, and to appreciate the differing approaches towards it. Some, for example, maintain that the processes of transnationalization has created a space for a new, discrete corpus of law--a field in its own right that is the equal of public international law or conflict of laws.

Others understand the perceived transnational phenomena to be illustrations of an emerging legal culture that no longer fits the traditional distinction between national and international jurisdictions. In offering different approaches to such an understanding of transnational law, these works also bring out the important consequences of a more global outlook in legal scholarship, legal practice, and legal education.