Gifts: A Study in Comparative Law 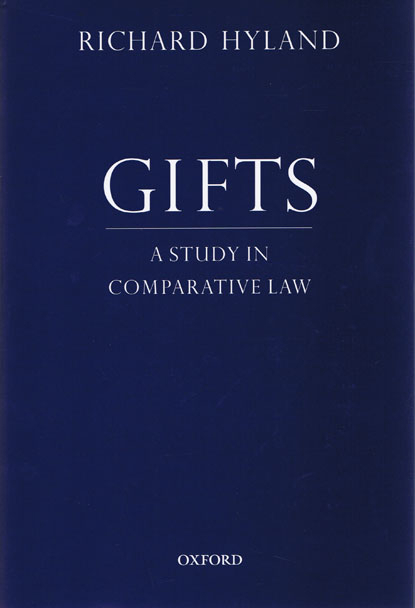 Gifts: A Study in Comparative Law is the first broad-based study of the law governing the giving and revocation of gifts ever attempted. First, gift-giving is everywhere governed by social and customary norms before it encounters the law. Second, the giving of gifts takes place largely outside of the marketplace.

As a result of these two characteristics, the law of gifts provides an optimal lens through which to examine how different legal systems confront social practice.

The law of gifts is well-developed both in the civil and the common laws. Richard Hyland's study provides an excellent view of the ways in which different civil and common law jurisdictions confront common issues. The legal systems discussed include principally, in the common law, those of Great Britain, the United States, and India, and, in the civil law, the private law systems of Belgium and France, Germany, Italy, and Spain.

Hyland also serves a critique of the dominant method in the field, which is a form of functionalism based on what is called the praesumptio similitudinis, namely the axiom that, once legal doctrine is stripped away, developed legal systems tend to reach similar practical results. His study demonstrates, to the contrary, that legal systems actually differ, not only in their approach and conceptual structure, but just as much in the results.

Contents:
Chapter 1 The Context of Gift Law
A. Notions of the Gift
B. Approaches to Gift giving
Chapter 2 A Flexible Methodology for Comparative Law
A. A Critique of Functionalism
B. A Common Sense Approach to the Law of Gifts
Chapter 3 The Legal Concept of the Gift
A. Gratuitousness
B. The Subjective Factors: Agreement and Donative Intent
C. An Inter Vivos Transfer
D. The Gift Object
Chapter 4 Gift Capacity
A. The Capacity of the Donor
B. The Capacity of the Donee
Chapter 5 The Gift Promise
A. Introduction
B. Circumstances Permitting Enforcement
C. Gift Promise Formalities and the Executed Gift
D. Defenses and Other Limitations
Chapter 6 Making the Gift
A. The Disposition
B. Acceptance
C. Perfection
Chapter 7 Revocation
A. The Principle of Irrevocability
B. Circumstances Permitting Revocation
Chapter 8 The Place of the Gift in the Private Law
A. Gift as Contract
B. Other Legal Characterizations
C. Beyond the Reach of the Law
Index