The Assault on International Law 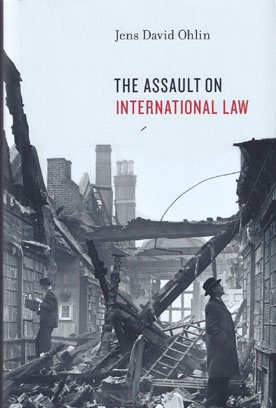 International law presents a conceptual riddle. Why comply with it when there is no world government to enforce it? The United States has long history of skepticism towards international law, but 9/11 ushered in a particularly virulent phase of American exceptionalism. Torture became official government policy, President Bush denied that the Geneva Conventions applied to the war against al-Qaeda, and the US drifted away from international institutions like the International Criminal Court and the United Nations. Although American politicians and their legal advisors are often the public face of this attack, the root of this movement is a coordinated and deliberate attack by law professors hostile to its philosophical foundations, including Eric Posner, Jack Goldsmith, Adrian Vermeule, and John Yoo. In a series of influential writings they have claimed that since states are motivated primarily by self-interest, compliance with international law is nothing more than high-minded talk.

These abstract arguments then provide a foundation for dangerous legal conclusions: that international law is largely irrelevant to determining how and when terrorists can be captured or killed; that the US President alone should be directing the War on Terror without significant input from Congress or the judiciary; that US courts should not hear lawsuits alleging violations of international law; and that the US should block any international criminal court with jurisdiction over Americans. Put together, these polemical accounts had an enormous impact on how politicians conduct foreign policy and how judges decide cases - ultimately triggering America's pernicious withdrawal from international cooperation.

In The Assault on International Law, Jens Ohlin exposes the mistaken assumptions of these 'New Realists,' in particular their impoverished utilization of rational choice theory. In contrast, he provides an alternate vision of international law based on a truly innovative theory of human rationality. According to Ohlin, rationality requires that agents follow through on their plans even when faced with opportunities for defection. Seen in this light, international law is the product of nation-states cooperating to escape a brutish State of Nature-a result that is not only legally binding but also in each state's self-interest.