An Affair of State: The Profumo Case and the Framing of Stephen Ward 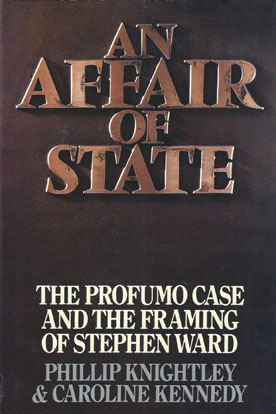 Stephen Ward was a central figure in the political scandal which shook Britain in the 1960s. It was in Ward's flat that John Profumo, Secretary of State for War in the Macmillan Government, used to meet the call girl Christine Keeler. It was Ward who introduced Christine to the dashing Soviet diplomat, Yevgeny Ivanov.

It was Ward who told MIS about Keeler and Profumo because he thought that their affair might pose a security risk. When Profumo lied to the House of Commons about his love life, and the resulting scandal threatened to bring down the Government, it was Ward who stood in the dock at the Old Bailey, scapegoat for the establishment.

His trial turned out to be one of the most amazing in British legal history. Ward had been framed. The police had spent months investigating his activities to find something against him. Witnesses were pressured by the police into giving false evidence. Those who had anything favourable to say were silenced. And when it looked as though Ward might still survive, the Lord Chief Justice shocked the legal profession with an unprecedented intervention to ensure Ward would be found guilty.

Deserted by all those he had trusted, Ward decided that 'the vultures' would not get him. He wrote letters to his friends and enemies and then killed himself. Apart from one from the family, there was only one wreath from friends at his funeral. Overnight the Profumo affair disappeared from the headlines.

A quarter of a century later the authors of this book have tracked down and interviewed hundreds of people who were involved. Many, conscience-stricken at what happened, have spoken out for the first time. A major coup was to track down the four-man police team which had concocted the case against Ward. One senior detective had died soon after the trial. The other left the police force and disappeared in Australia - but the two juniors, known at the time as 'the hunters', spoke frankly on how Ward had been set up.

The pillar of Ward's defence - that he had been recruited by MIS to persuade the Russian to defect - was laughed out of court. Yet MIS officers have now confessed that this was indeed the truth, and that the service had disowned Ward so as to avoid becoming embroiled in the scandal. From Government documents previously classified as secret, and from Ward's own unpublished memoirs, the authors have discovered who was behind the campaign to get him, why the American Government was so worried by the scandal, and how the FBI and the CIA became involved.

An Affair of State reveals a great miscarriage of justice. It describes what happens when a democratic state decides to sacrifice one of its citizens for what it considers the greater good. It is also one of the most gripping stories of our time, a powerful account of sexual compulsion, hypocrisy, friendship, loyalty, honour and betrayal.