A Very English Scandal: Sex, Lies and a Murder Plot at the Heart of the Establishment 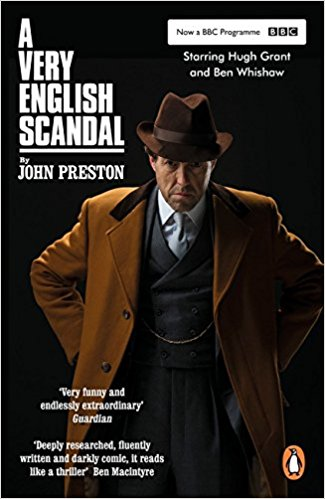 Behind oak-panelled doors in the House of Commons, men with cut-glass accents and gold signet rings are conspiring to murder.

It's the late 1960s and homosexuality has only just been legalised, and Jeremy Thorpe, the leader of the Liberal party, has a secret he's desperate to hide. As long as Norman Scott, his beautiful, unstable lover is around, Thorpe's brilliant career is at risk. With the help of his fellow politicians, Thorpe schemes, deceives, embezzles - until he can see only one way to silence Scott for good.

The trial of Jeremy Thorpe changed our society forever: it was the moment the British public discovered the truth about its political class. Illuminating the darkest secrets of the Establishment, the Thorpe affair revealed such breath-taking deceit and corruption in an entire section of British society that, at the time, hardly anyone dared believe it could be true.

A Very English Scandal is an eye-opening tale of how the powerful protect their own, and an extraordinary insight into the forces that shaped modern Britain.

This is a brilliant, sad, startling nonfiction novel about the Jeremy Thorpe murder-plot scandal. It is as funny and dark as anything by Evelyn Waugh or Jonathan Coe. And in these post Cyril Smith/Jimmy Saville days, it's so timely and relevant Jon Ronson

The most forensic, elegantly written, compelling account of one of the 20th century's great political scandals... a real page-turner. An entertaining mix of tragedy and farce, involving people in high and low places. Observer

Contents:
Part One
A Dinner at the House of Commons
The Postcard
The Eye of Urse
Bunnies
Mr Bessell Goes to Dublin
The Creature
This Filty Subject
Bessell Pulls another Rabbit Out of His Hat
The Blessings of Family Life
Two Pledges
Unexpected developments
A Happy and Joyous Occasion
Shooting a Sick Dog
Part Two
The Ultimate Solution
Doomed
Back to Black
The Price of a Peerage
From Bad to Worse
Big Swamp
A Death Unforseen
A Simple Plan
Things Fall Apart
Bessellised
The Man from Canada
Death on the Moor
Part Three
Vive les trois mousquetaires
A Bloody Mess
Damned Lies
Judas
Ice Cold in Minehead
Waiting in the Wings
Overture and Beginners
Part Four
Ripped to Shreads
The Greatest Show on Earth
The Judgement of Cantley
Awkward Bows
Postscript
Acknowledgements
Index;