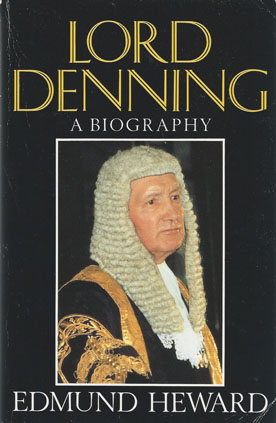 When Lord Denning retired in 1982, aged 83, he was, as Lord Hailsham the Lord Chancellor said, 'a legend in his own lifetime', and The Times wrote that he had 'legal genius and a laudable mission to make the law accord with justice.'

This great and often controversial judge had consistently argued against the abuse of power and in defence of the common man against overbearing authority, whether it was a department of State, a trade union or a bullying employer. He was an early protector of deserted wives.

As Master of the Rolls from 1962 to 1982 he was never out of the public eye and he helped transform the law of this country. His report on the Profumo Affair in 1963 was described by John Sparrow, the Warden of All Souls, as 'the raciest and more readable bluebook ever published'

In this biography we have the first complete account of one of the most extraordinary careers in our legal history and a vivid portrait of a most remarkable man.

Subjects:
Biography, Biography (Out of Print)