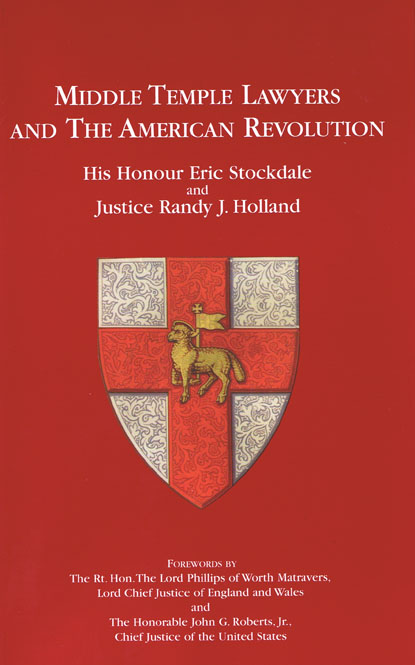 This work approaches the influence of the Middle Temple on the United States from three angles. It first describes the participation of Middle Temple-educated lawyers in crucial events leading up to and through the American Revolution.

Next, drawing on personal and often humorous transatlantic correspondence, it dissects the formative experiences of the American colonists who studied at the Middle Temple in London during the 18th century. Finally, it sets forth the stories of distinguished and notable colonial families that benefited from a Middle Temple education.

Many readers will be aware of the fact that American law is based on the English common law, and will have appreciated that it was brought with them by the first settlers. They will also know that some of the descendants of those settlers came to England in the eighteenth century to learn law and returned with a clear understanding of their rights as Englishmen, despite living in the American colonies.

When the London government attempted to tax the unrepresented colonists, many of the protests came from lawyers, a large proportion of whom had attended the Middle Temple in London for an important stage of their education. What may come as a surprise to many readers, is just how important the contribution of those Middle Templars was, not only to the resultant Revolution itself, but to the later discussions leading to the individual state constitutions as well as the United States Constitution.

They may also be interested to see how often the names of some of the most distinguished of those American members of the Middle Temple come up in the history of the infant United States, especially the names Dickinson, Reed, Rutledge and Pinckney.

“Members of the Inn will be delighted with this scholarly work, which brings the threads of our history together, but it will surely appeal also to any with an interest in American history for the new light that it throws on familiar events.”
The Rt. Hon. The Lord Phillips of Worth Matravers,
Lord Chief Justice of England and Wales

“Readers will come away with a deeper appreciation of the character of the Nation’s leading colonial lawyers, the role of English legal education in their lives, and the influence of the Middle Temple in shaping American institutions.”
The Honorable John G. Roberts, Jr.,
Chief Justice of the United States

Contents:
List of Illustrations
Foreword by The Rt. Hon. The Lord Phillips of Worth Matravers,
Lord Chief Justice of England and Wales
Foreword by The Honorable John G. Roberts, Jr.,
Chief Justice of the United States
Preface
1 FROM JAMESTOWN TO PHILADELPHIA
The Stamp Act Congress
The Continental Congress
From Confederation to Federation
2 AMERICAN STUDENTS AT THE MIDDLE TEMPLE
Peter Manigault
John Dickinson
3 THE CHIEF JUSTICES OF PENNSYLVANIA I:
WILLIAM ALLEN AND HIS SONS
4 THE CHIEF JUSTICES OF PENNSYLVANIA II:
BENJAMIN CHEW AND HIS SUCCESSORS
Joseph Reed
Thomas McKean
Edward Shippen
5 THE LEES AND RANDOLPHS OF VIRGINIA
The Lees
The Randolphs
6 THE RUTLEDGES AND PINCKNEYS OF SOUTH CAROLINA
The Rutledges
The Pinckneys;