The Opening Statement of the Prosecution in International Criminal Trials: A Solemn Tale of Horror 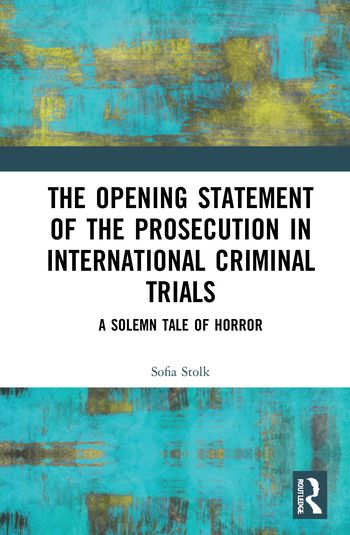 This book addresses the discursive importance of the prosecution’s opening statement before an international criminal tribunal. Opening statements are considered to be largely irrelevant to the official legal proceedings but are simultaneously deployed to frame important historical events. They are widely cited in international media as well as academic texts; yet have been ignored by legal scholars as objects of study in their own right. This book aims to remedy this neglect, by analysing the narrative that is articulated in the opening statements of different prosecutors at different tribunals in different times.

It takes an interdisciplinary approach and looks at the meaning of the opening narrative beyond its function in the legal process in a strict sense, discussing the ways in which the trial is situated in time and space and how it portrays the main characters. It shows how perpetrators and victims, places and histories, are juridified in a narrative that, whilst purporting to legitimise the trial, the tribunal and international criminal law itself, is beset with tensions and contradictions.

Contents:
List of abbreviations
1. A Beginning
2. History
3. Maps and Landscapes
4. The Victim and the Truth
5. The Ideal Perpetrator
6. An Ending
Bibliography