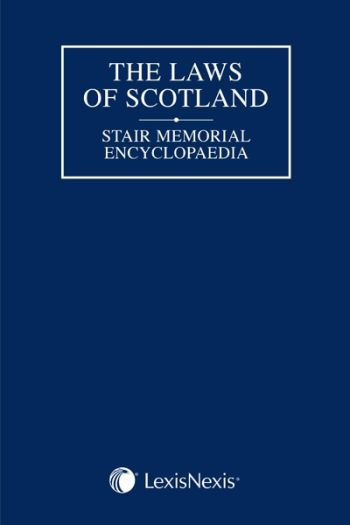 The Stair Memorial Encyclopaedia provides the only comprehensive narrative statement of the law of Scotland. Written by leading lawyers – both practitioners and academics - and other professionals, including doctors, surveyors and historians, the Encyclopaedia ranks among that select group of publications which is cited with approval before the courts. Containing over 130 titles in 25 volumes and Reissue binders, it covers the whole spectrum of Scots law, from Administrative Law, through Criminal Law, Obligations and Property, to Wills and Succession. It incorporates law derived from every source and, while concentrating on the specialities of Scots law, also covers law common to the whole of the United Kingdom.

The Encyclopaedia is arranged alphabetically by title and each title is broken down into convenient and logical numbered sections in which the substantive law is summarised. Each statement of law is supported by citation of authority, and there are copious references to sources of further information, both primary and secondary, to ensure the reader has detailed information to hand. The work is thoroughly indexed to make it clear and easy to use. Each individual title has its own index, and a consolidated index of the complete work is available. Similarly, each volume contains tables of cases, statutes, and statutory instruments for those titles it covers and consolidated tables for the whole work are available.

The Encyclopaedia titles are kept up-to-date each year by two service elements – the Reissue Service and the Updating Service. Together these provide a comprehensive updating service.


REISSUE SERVICE Individual titles are revised and reissued as necessary to take into account changes in the law. Revised or completely new titles are reissued as booklets with their own tables and index and are housed in a binder. The equivalent of two volumes is published in each subscription year under the General Editorship of Niall R Whitty, Visiting Professor of Law at the University of Edinburgh and former Scottish Law Commissioner. The Reissue service is charged annually.
UPDATING SERVICE Both original titles which have not yet been reissued and reissued titles are updated by a noter-up service. The Updating service maintains the currency of the Encyclopaedia by providing detailed additions and amendments, paragraph-by-paragraph. During the service subscription year the noter-up is published in March as a cumulative supplement which, in turn, is updated at four-monthly intervals by a cumulative noter-up in looseleaf form. The Updating service is charged annually
REVISED TABLES Revised cumulative tables and indexes are published annually and are charged for separately on publication. The tables are charged for separately on publication.