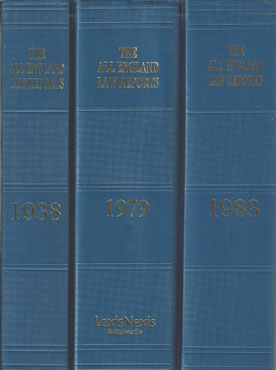 The All England Law Reports is a general series of law reports enjoying an unrivalled reputation in all common law jurisdictions. Published in weekly parts, it provides, in full text, cases heard by the House of Lords, the Privy Council, both divisions of the Court of Appeal and all divisions of the High Court in a consistent and reader-friendly style.

Cases are clearly presented with catchwords and headnotes summarising the judgments clearly and accurately. Cross-references are given to other major legal works, including Halsburys Laws, Halsburys Statutes and Statutory Instruments and The Digest, which means that no important reference is excluded.

The Noter-up service, issued ten times per year, keeps the volumes up to date by providing labels that can be added to a case to indicate whether it still holds as current law.

The Annual Review is a volume of essays outlining the major cases and developments that have occurred across a wide range of legal subjects to ensure the reader has the most up-to-date information to hand.

A Current Tables and Index is issued four times a year, covering all cases reported during the calendar year, up to the date of issue. These are combined into a cumulative index at the end of the year. A consolidated Tables and Index is published every year.