This book is now Out of Print.
A new edition has been published, the details can be seen here:
Uniform Evidence in Australia 2nd ed isbn 9780409344905 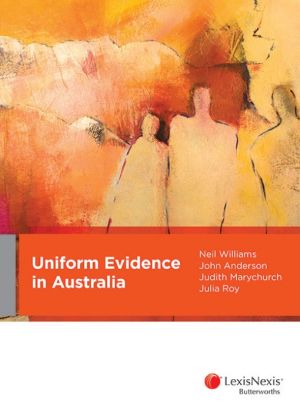 This book offers a user-friendly approach that combines commentary on the operation of the uniform Acts in each jurisdiction with a synthesis of the large body of cases, rules and related legislation. Understanding of the Acts’ operation and interpretation is further enhanced by reference to the common law principles that are enshrined in, replaced or supplemented by individual provisions.

Relevant practice notes and examples are included. For ease of navigation, the commentary to each provision includes extensive cross-references to other provisions that may impact on a particular issue, and the book includes a useful Glossary based on Act and common law terminology.

The authors examine recurring challenges in the construction and application of the legislation, including the extent to which it is necessary or proper to resort to pre-Act case law. In so doing, they highlight and explore the tension between the prescriptive nature of some sections and the apparent reliance of others upon pre-existing common law principles.

Significant recent developments that are addressed include: