This book is now Out of Print.
A new edition has been published, the details can be seen here:
Arlidge, Eady & Smith on Contempt 5th ed with 1st Supplement isbn 9780414074507 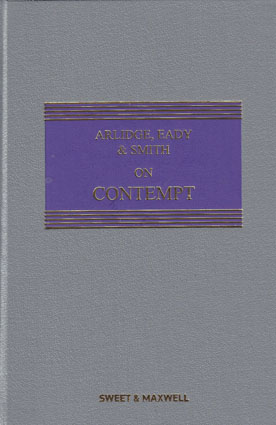 Arlidge, Eady & Smith on Contempt is a comprehensive and authoritative commentary on the subject, explaining everything from the development of contempt, its origins in common law, its general principles, its various categories, and its statutory underpinnings (domestic and EU), through to the latest developments in this ever evolving area of law.

Since the last edition, there have been fundamental changes in the procedural landscape for contempt.

The 5th edition addresses, among many others, the following changes:-

Contents:
History of the law of contempt
Contempt of Court: The constitutional dimensions
Distinctions between criminal and civil contempt
The statutory regime for strict liability
Contempts by publication at common law
Court orders affecting the media
Court reporting I: Restrictions under the 1981 Act
Court reporting II: Other statutory restrictions
Protection of sources
Contempt in the face of the Court
Direct interference with the administration of justice
Civil contempt
Jurisdiction
Sanctions and remedies
Practice, procedure and public funding
The law of contempt in Scotland
Appendices