This book is now Out of Print.
A new edition has been published, the details can be seen here:
Documentary Evidence 14th ed isbn 9780414092020 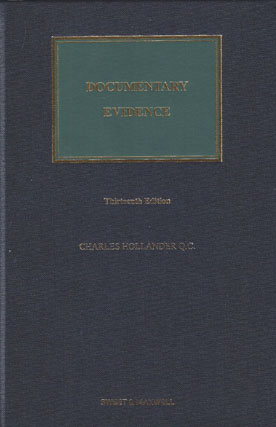 Now in its 13th edition, Documentary Evidence is a comprehensive guide to the legal obligations of disclosure. Logically presented and lucidly written, it provides detailed analysis and sensible practical advice.

Following a chronological structure, it shows when and how a practitioner should take action in relation to the obligation to disclose. It is a standard work that is often cited in court judgments.

Under the Civil Procedure Rules the parties to an action are encouraged to adopt a “cards-on-the-table” approach toward the exchange of information, not just once litigation has commenced but before as well. It is likely in the early stages that a few documents will be identified as being relevant or key to the matter at hand. These will be used to provide advice as to the merit or not of proceeding with the dispute.

If the decision is taken to proceed, the law imposes a requirement to make full and proper disclosure, which is the process whereby the parties to an action disclose to each other all documents in their possession, custody or power relating to matters in question in the action. This title deals with the nature and scope of the obligation to disclose.