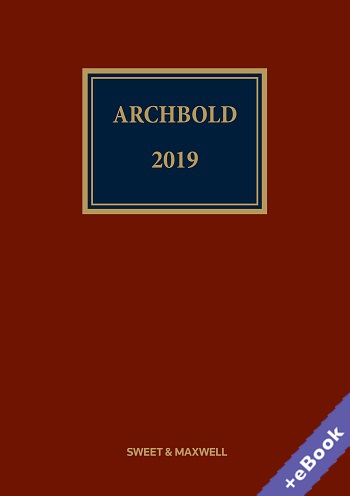 
ISBN13: 9780414069916
Published: October 2018
Publisher: Sweet & Maxwell Ltd
Country of Publication: UK
Format: Book & eBook Pack (ProView)
Price: Out of print
The amount of VAT charged may change depending on your location of use.
Convert Currency

Following a survey of all Resident Judges in 2016, the decision was taken centrally to provide Blackstone’s Criminal Practice in every Crown courtroom in England & Wales. Previously, each court centre determined whether to order and use Blackstone or Archbold. Judges continued to be able to access both works online and use their personal allowances to buy books of their choosing. At the time, it was made clear that this decision would be reviewed at a later date.

Over the last eighteen months the judiciary and the Judicial Library Service have worked closely with Oxford University Press and Thomson Reuters to provide input into the forthcoming editions of each of the works. I am now pleased to confirm that, as a result of discussions with OUP and Thomson Reuters, for the forthcoming legal year, every Crown courtroom will be provided with one copy of each book. This will enable us to conduct a meaningful review, which will inform the decision on which book will be provided from October 2019.

I encourage all criminal judges to consult and make use of both publications, whether online or in print, prior to the review which is expected to be undertaken in Spring 2019. The Judicial Library Committee will now begin work on how best to conduct the review, and further information on the content and format will be issued in due course.

We are pleased to announce His Honour Judge Mark Lucraft Q.C., the Chief Coroner of England and Wales, as the new General Editor of Archbold, supported by a new Judicial Board of nine judges. We have also expanded the author team with additional expert practitioners and offer an unrivalled writing team on criminal practice and procedure.

Key chapters have been revised or restructured:

Other important chapters that have been significantly reviewed or revised include Chapter 15 on Investigatory Powers; Confessions; Discretion etc; Chapter 17 on The Mental Element in Crime; Chapter 19 on Offences Against the Person; Chapter 20 on Sexual Offences; and Chapter 25 on Offences against the Crown and Government.

FURTHER IMPROVEMENTS BASED ON YOUR FEEDBACK