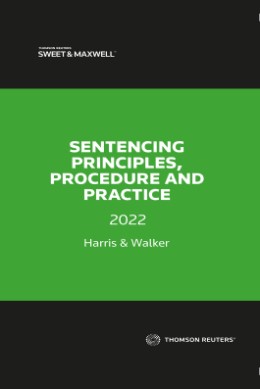 The second edition of this new annual title is an essential introduction and companion to the new Sentencing Code. The book is split into two parts: Part A contains everything you need to know about sentencing procedure, courts’ sentencing powers and the sentencing principles, including the Sentencing Code; Part B provides guidance on determining the appropriate sentence for almost all criminal offences.

Cited in the Court of Appeal (Criminal Division), this work guides practitioners though the various stages of a sentencing hearing and clearly indicates the considerations applicable to a sentencing decision. The title includes extensive expert commentary and summaries of all the relevant case law. For use in sentencing hearings and appeals, in court and for research.

New coverage in this edition includes: The new edition also incorporates new cases providing guidance from the CA (Crim Div) and the Divisional Court on sentencing law and procedure, and accompanying commentary and analysis, including: