This book is now Out of Print.
A new edition has been published, the details can be seen here:
Comparative Media Law and Ethics 2nd ed isbn 9781138652637 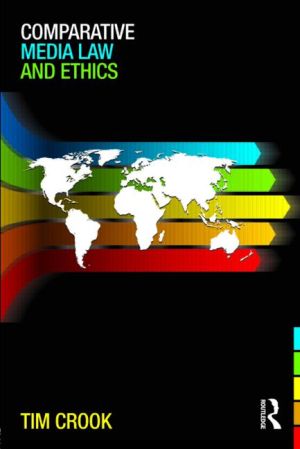 
Providing practical and theoretical resources on media law and ethics for the United Kingdom and United States of America and referencing other legal jurisdictions such as France, Japan, India, China and Saudi Arabia, Comparative Media Law and Ethics is suitable for upper undergraduate and postgraduate study and for professionals in the media who need to work internationally.

The book focuses on the law of the United Kingdom, the source of common law, which has dominated the English speaking world, and on the law of the USA, the most powerful cultural, economic, political and military power in the world. Media law and ethics have evolved differently in the US from the UK. This book investigates why this is the case.

In one chapter Tim Crook considers other media law jurisdictions:-

Tim Crook analyses media law, as it exists, the ethical debates concerning what the law ought to be, and the historical development of legal and regulatory controls of communication. Underlying concepts discussed include the subject of media jurisprudence - the study of the philosophy of media law, media ethicology - the study of the knowledge of ethics/morality in media communication, and media ethicism - the belief systems in the political context that influence journalistic conduct and content. Throughout, media law and regulation is evaluated in terms of its social and cultural context.

If you need to compare different law and ethics systems, are studying international journalism or want to understand the legalities of working in the media in different jurisdictions, then you should find this an important and useful guide.